Lookie What Followed Me Home..

Took advantage of some unseasonably cool weather we've had the past two weekends to clean up and update the little Resorter's electrical system.. It got a fresh set of switches for all the main boat circuits along with a new 12 gang fuse block with integral ground bus..

Our cool weather made it bearable to lay under the dash for several hours cleaning up the rat's nest of wiring behind the instrument panel.. 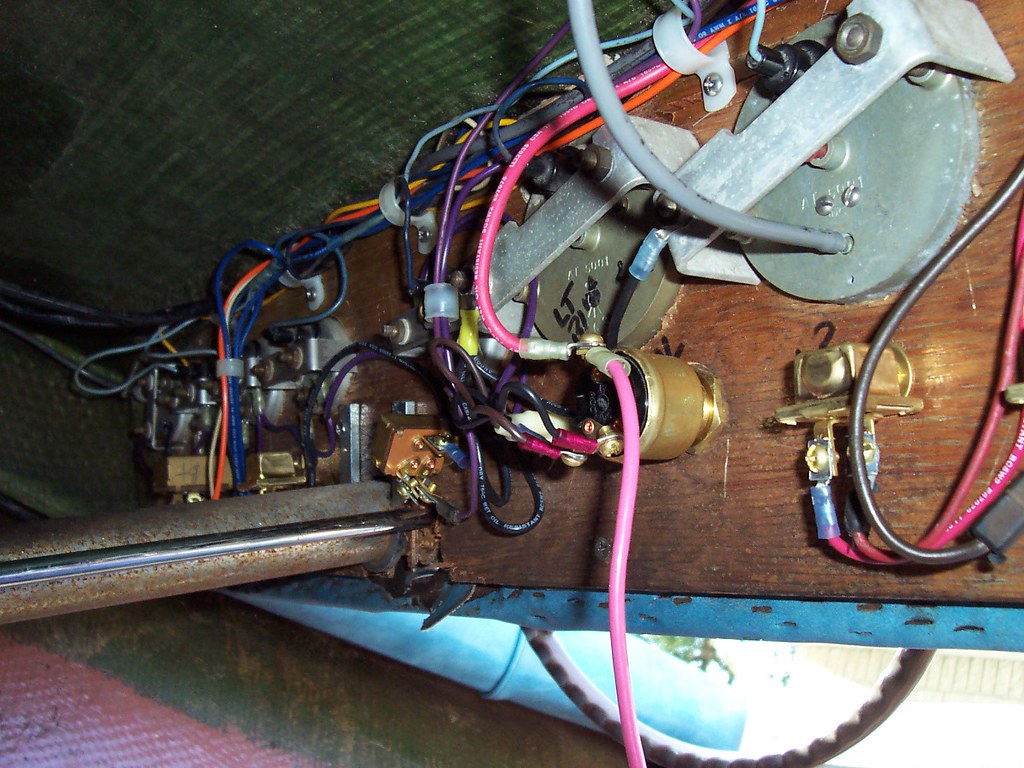 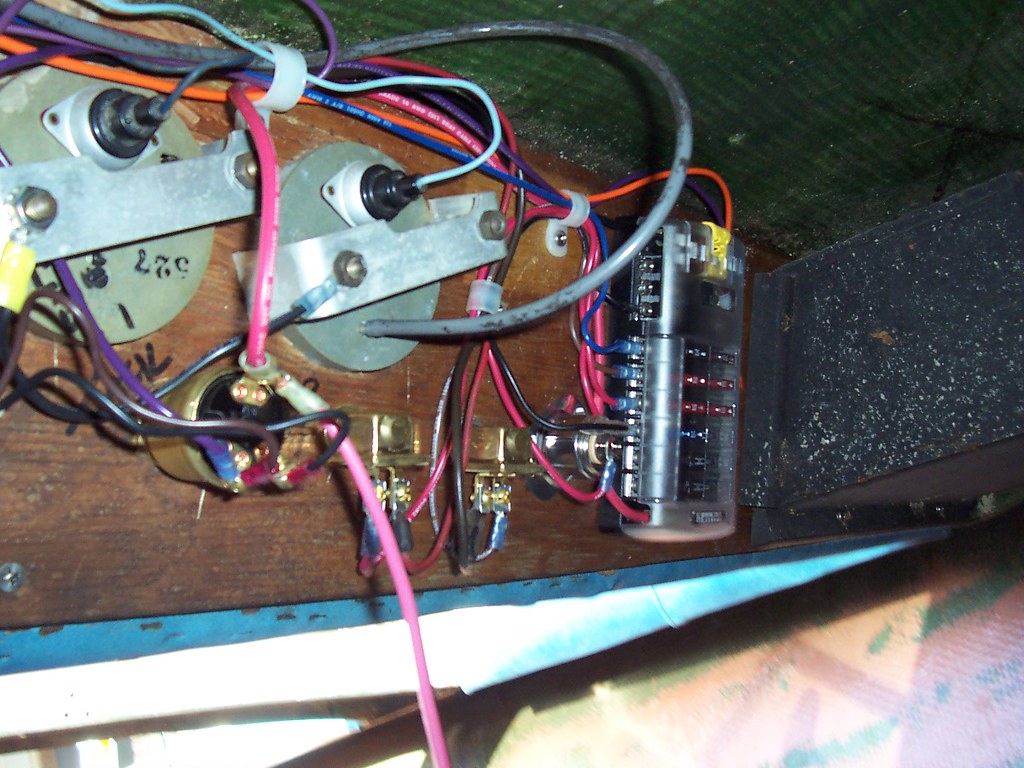 I also pulled all the gauges and buffed & polished the bezels and lenses before re-connecting all the wiring.. 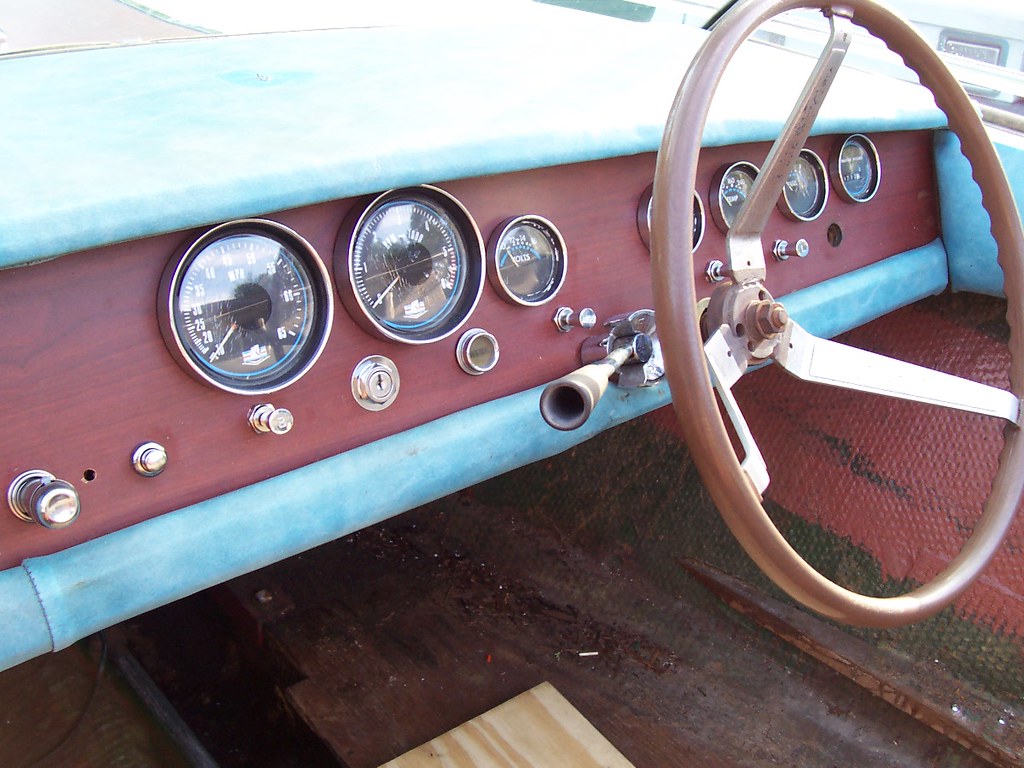 The new fuse panel will make adding extra electronic devices much easier, as I now have a few extra slots for adding a stereo, courtesy lights under the gunwales, and an extra bilge pump.. 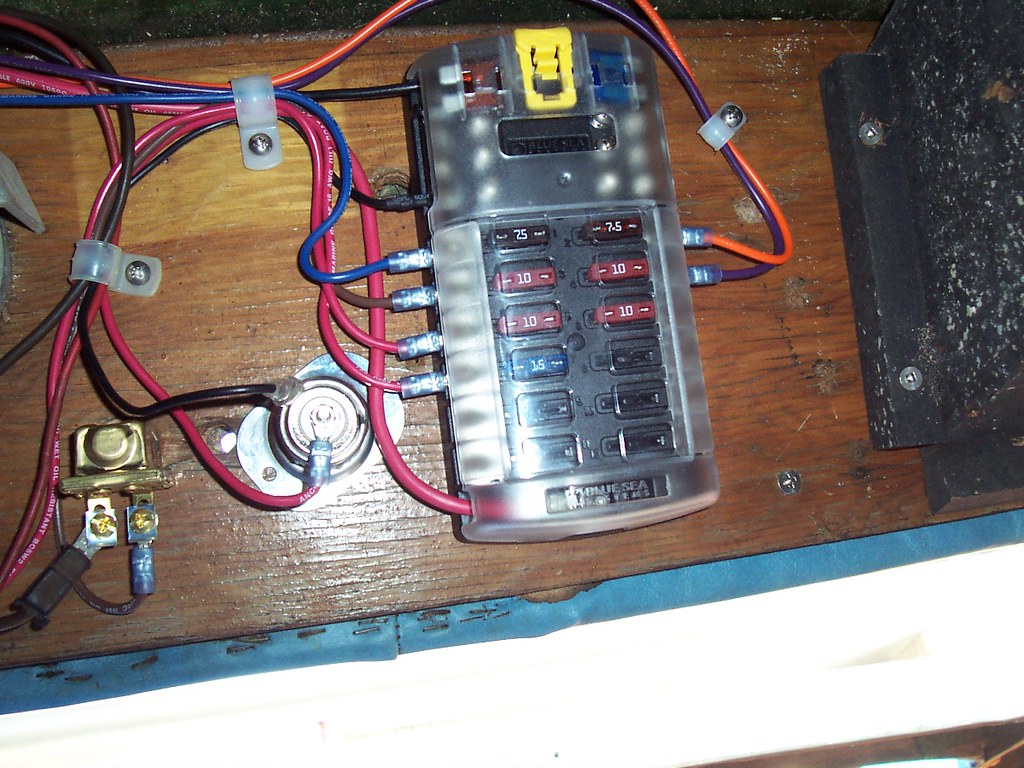 Also got all the harnesses that run to the rear of the boat re-secured under the gunwales and under the rear deck.. 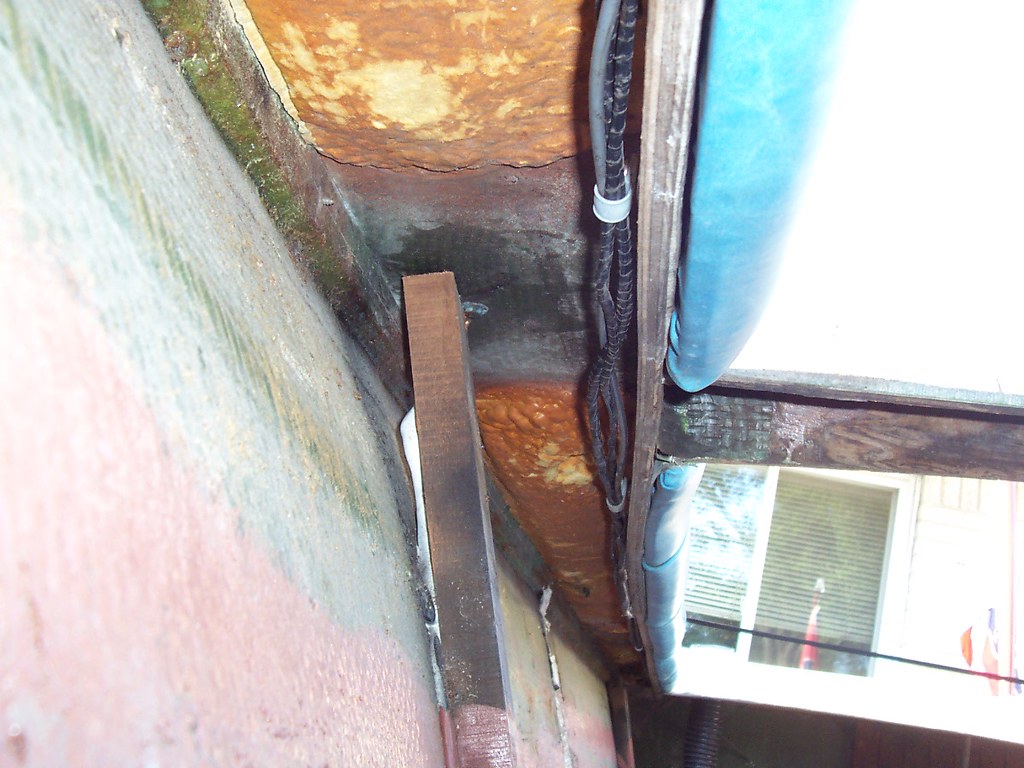 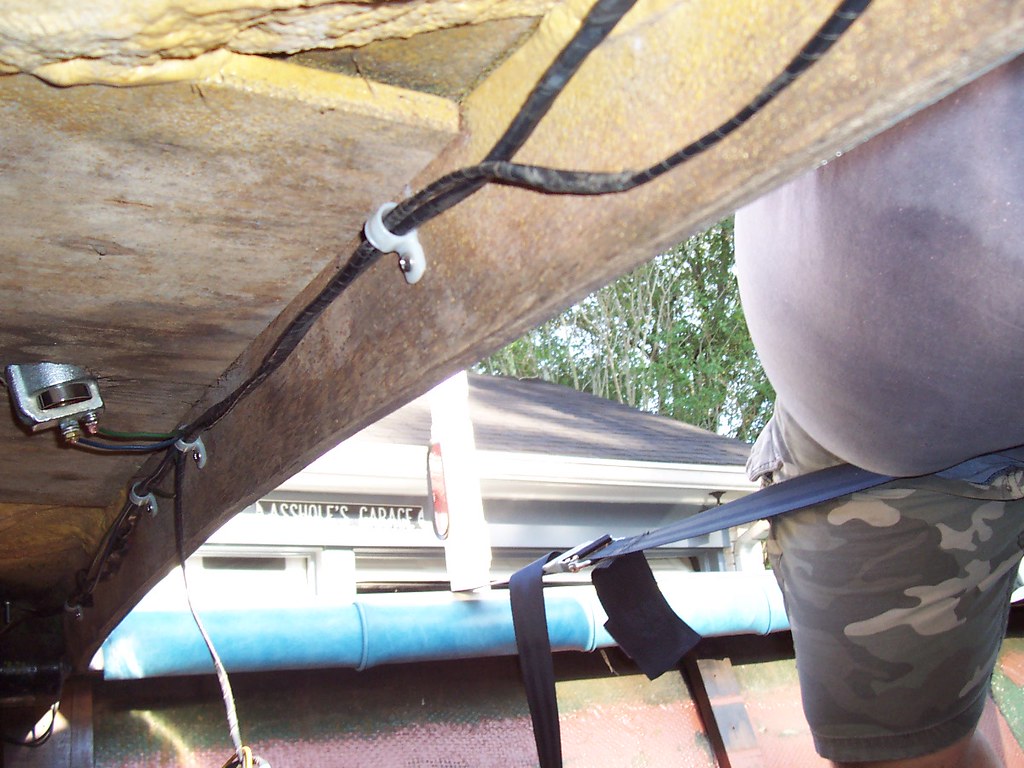 Pulled the glovebox liner out, added some reinforcements and an extra support under the dash so I could mount a marine stereo with iPod dock in it's back panel.. I didn't want to hack up the dash for a modern stereo that would look out of place with all the original instruments.. 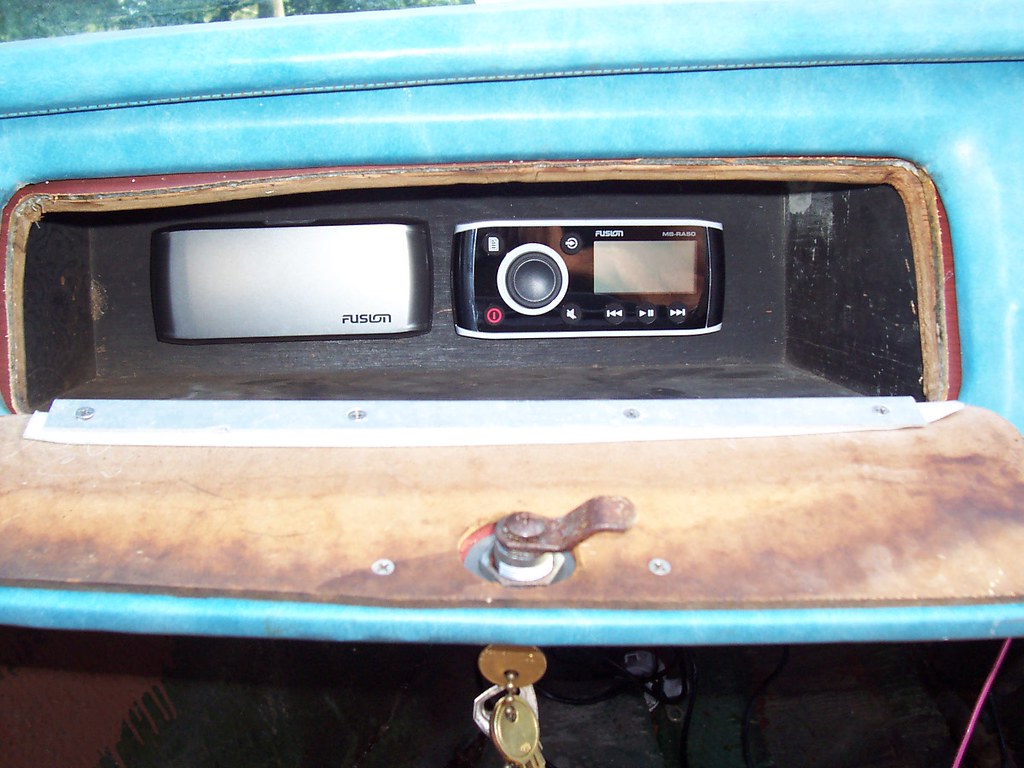 Then this afternoon I broke out the buffer and the Meguiar's and buffed, polished and waxed the hull.. Then it was time to sit up in the boat with a cocktail and a cigar to watch a beautiful sunset.. Next weekend the decks will get a buff, polish, and wax.. 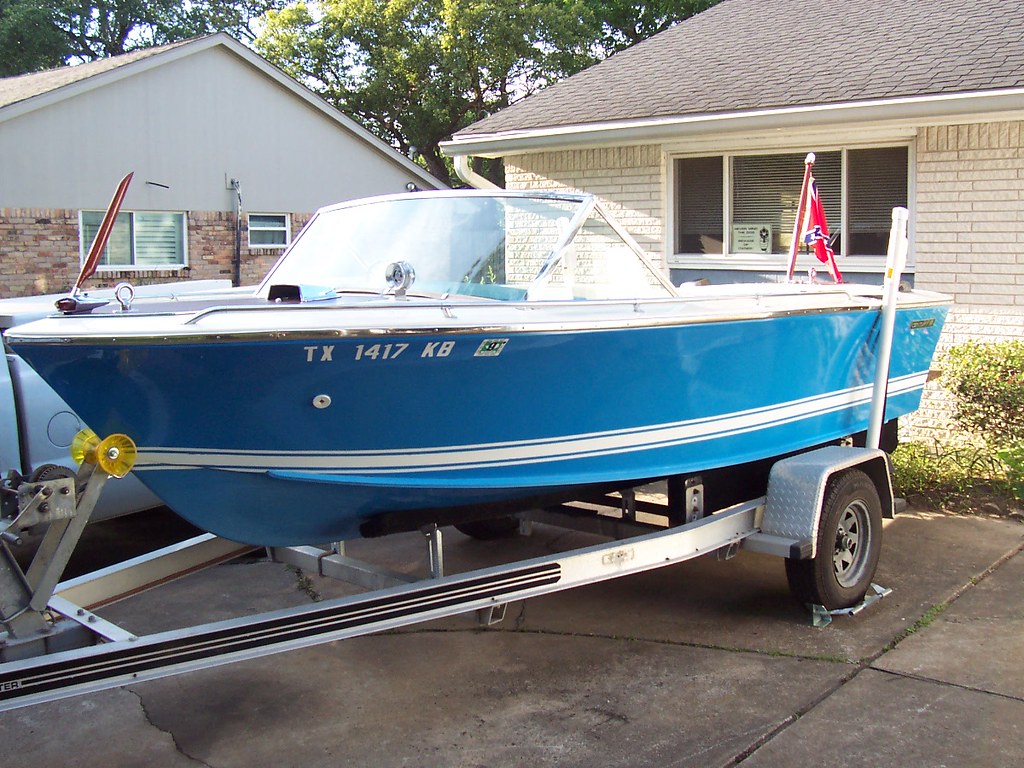 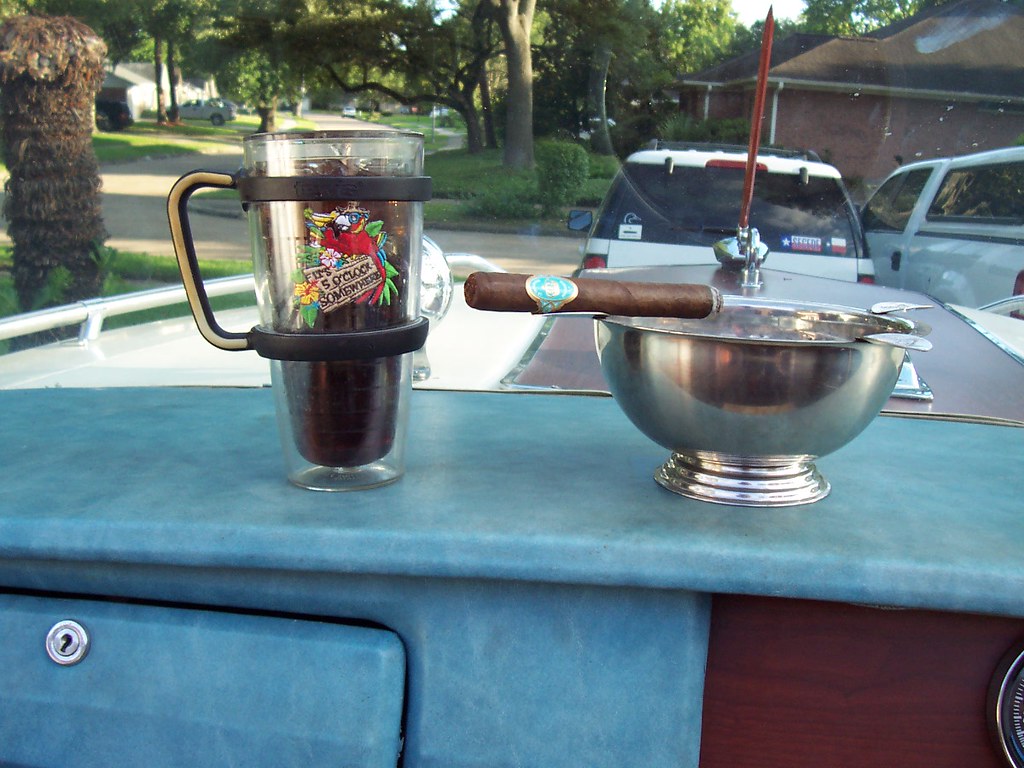 Got my materials list together and will be rounding up all the stuff this week so I can get started on replacing the floors along with rebuilding some of the interior furniture..

It's starting to look really good John. Did you also have the dashboard reupholstered with that blue Naugahyde? It looks too good to be original. I also have two of those same "Stinky" ashtrays as well. One on my deck table out back and one in my trailer for travelling.

That trailer she is sitting on looks pretty new too. Did you get that as part of the "package" or was that a replacement too?

...darn, that is a good looking boat!!! Very nice looking install on the wiring/dash and a really good idea on the stereo...sure looks like a nice place to sit and contemplate!!!
madjack

It's starting to look really good John. Did you also have the dashboard reupholstered with that blue Naugahyde? It looks too good to be original. I also have two of those same "Stinky" ashtrays as well. One on my deck table out back and one in my trailer for travelling.

That trailer she is sitting on looks pretty new too. Did you get that as part of the "package" or was that a replacement too?

I've been trying to get a lot of the PITA work knocked out before our real summer weather settles in down here..

All the boat's upholstery is original, the previous (original) owner always kept it stored in the garage when not in use.. The seats are starting to show their age but are in generally serviceable condition.. I'll probably end up getting a replacement upholstery kit from A&A Marine, they have all the patterns and dies to replicate the original interiors..

The previous owner replaced the trailer back in the mid 90's when the one that was delivered with the boat finally rusted out and was beyond repair.. When I got it, it needed the bunk brackets replaced and the hubs gone thru, along with a new set of leaf springs.. That was one of the first projects I did, so I would have a solid "cradle" for hauling it back & forth between my storage unit and the house..

Those Stinky's are the bomb!! I've got three of them, two of the "regular" ones here at the house (one in my office, and one on the workbench in the garage) and one of the "junior" sized ones that stays in the Casita (it doesn't eat up so much space on the dinette table)..

Last summer, one of my cigar smoking customers gave me a product that I didn't even know I needed.. Now I can't live without it, it's called a "Cigar Brake" and I carry one in my pocket nearly all the time and keep one in all our vehicles.. I was using the hell out of it while I was buffing the boat out Sunday afternoon, beats the hell out of lugging an ashtray around and you don't have to worry about your stogie rolling off and falling to the ground..

...darn, that is a good looking boat!!! Very nice looking install on the wiring/dash and a really good idea on the stereo...sure looks like a nice place to sit and contemplate!!!
madjack

It's almost hard to believe that the gelcoat on this boat is pushing 45 years old, it didn't take much effort with a buffer to bring back a deep gloss..

I wish I had taken a pic of the rat's nest I started with under there, all the original plastic harness clips had disintegrated from age and had let all the wiring fall down.. The previous owner had tried to secure it by just using zipties to cinch it up to the back of the gauges, but that just made a bigger mess to deal with..

I had originally thought about making a small dash panel to install the stereo below the center of the dashboard, even went so far as to cut one out of a scrap of plywood to see how it would fit/look.. But the driver's cockpit on this boat gets pretty cramped once the seat is installed, and it would have ended up being a knee buster trying to enter or exit the helm seat.. So the next best place was the glovebox, after seeing the finished install I'm kinda glad mounting it under the dash didn't work out..

Once I get this little shingle back to the water, it will be an even better place to "sit and contemplate", especially with a stereo being fed by a 160GB iPod loaded with everything from Glenn Miller & Frank Sinatra to George Jones & Conway Twitty to AC/DC & Metallica..

Hey John, I liked those Cigar Brake holders you linked to. Hell, I bought a "3 pack" assortment of them, just because...

To say that I have an eclectic music collection is a gross understatement, but with a collection of over 4,200 songs (not counting all the Redd Foxx, George Carlin and Richard Pryor comedy albums

) on my iPod, I can usually find some music to fit whatever mood I happen to be in..

Hey John, I liked those Cigar Brake holders you linked to. Hell, I bought a "3 pack" assortment of them, just because...

Glad I could help!! I've always prided myself on being the best "bad example" I can be..

I've been busy making sawdust for the last several evenings.. I managed to get a new base built for the rear seat cushion, cut a new back for the front seat backrest and made a new set of feet for the fuel tank platform.. Kinda in a lull right now waiting on some more supplies to come in, got a gallon of Century mahogany bilge paint and two gallons of CPES on the way in so I can seal & paint all the new interior parts..

I used the last of my CPES that I had on hand to seal all the parts of the new rear seat base before assembling it the other night.. I figure this one might outlast the boat since I assembled it with stainless crown staples instead of the plain mild steel ones that Century used on the original one.. 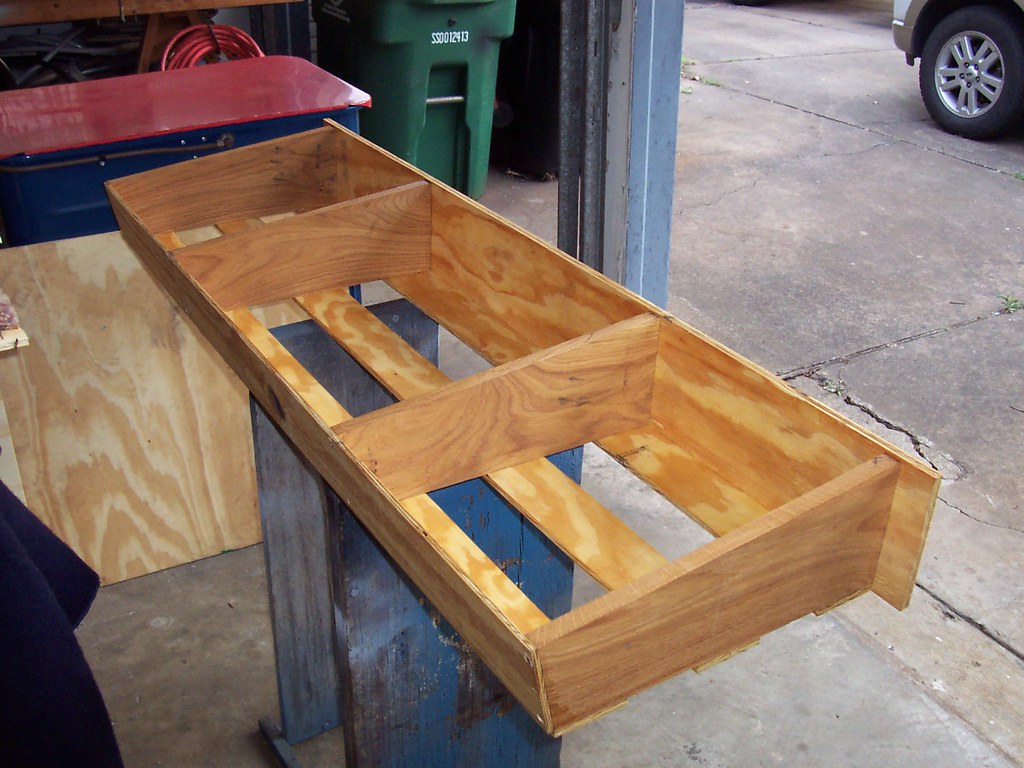 All the parts for the front seat backrest awaiting a fresh batch of CPES before assembly.. 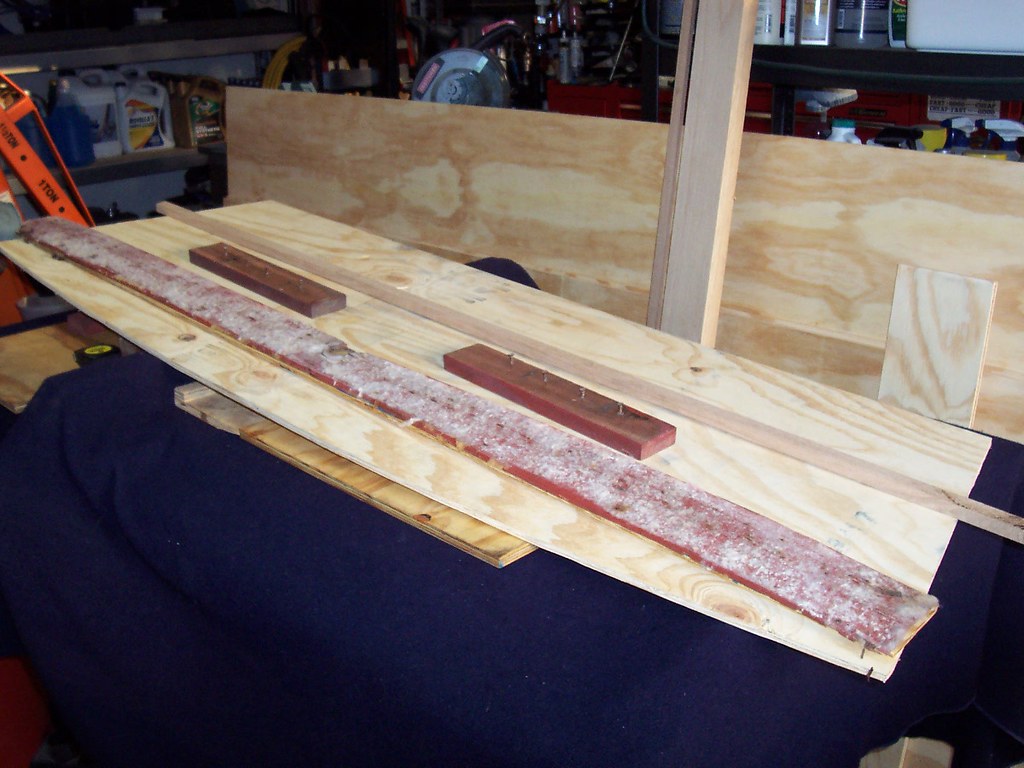 And the new "feet" for the fuel tank platform, had to break out the taper jig to dupe these rascals.. 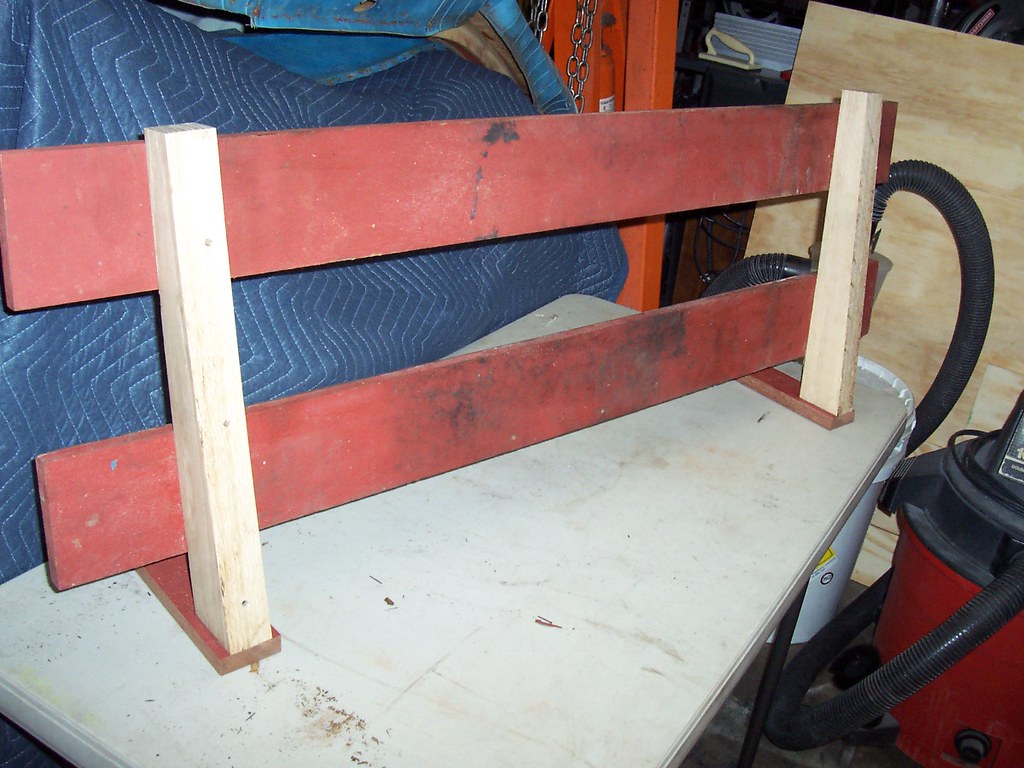 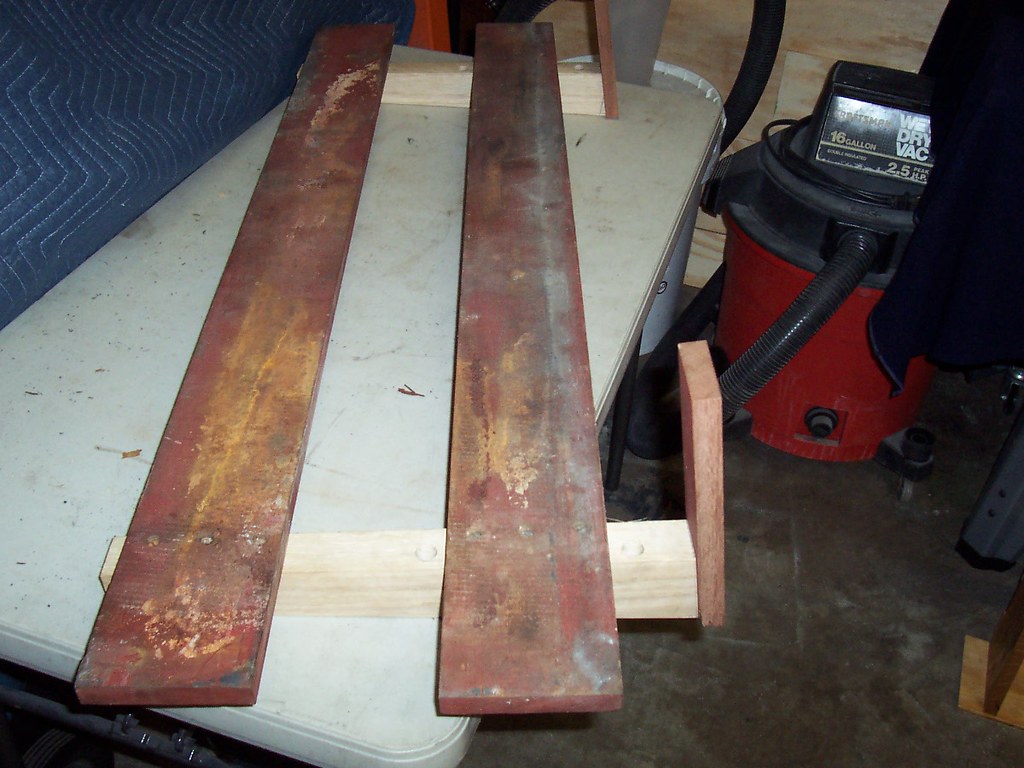 Once I get my fresh set of CPES in and seal all the new parts, everything will get assembled then get two coats of the mahogany bilge paint sprayed on it..

Its always good to see master craftsmanship and attention to detail. Nice work.

Its always good to see master craftsmanship and attention to detail. Nice work.

Luckily, most of the original parts that were rotted were still in decent enough shape to be able to take accurate measurements to make their replacements.. There were a few parts that had enough rot damage that I just had to make an "educated" guess on some of the measurements so I could duplicate the parts, some of those will get a few test fits in the boat along with a few "adjustments" before getting painted..

Now if I can just get past Memorial Day weekend, my day job will give me a bit of a break so I can get a few good licks in on replacing the floor in the boat before our really hot weather settles in..

Not too much progress to report, work has been keeping me tied to the whipping post and not allowing for much "Quality Boat Time".. Hopefully I'll be able to get a pile of parts painted this weekend as we're gonna have some great painting weather.. All the little odds & ends for the interior are cut or built, coated with CPES, and waiting on a couple coats of mahogany bilge paint..

Once all this little stuff is out of the way, the floor replacement will be the only thing left to replace before reassembling the boat..

Still no progress to report, between work and now a pinched nerve in my neck that has limited my range of motion in my left arm, the boat has been kinda pushed to the back burner for now.. Going to see the Doc Monday morning to see if he can do or give me something to relieve the pressure on the nerve and get rid of this literal "pain in the neck"..

...you have my sympathy/empathy...good luck at the docs...I'll cross my fingers and send some positive thoughts your way.........
madjack